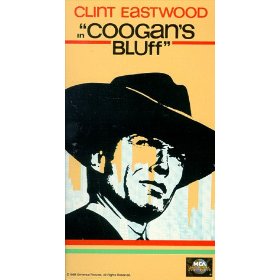 The Western typically was a re-writing and re-imagining of America’s bloody heritage. This re-writing had the foolish Custer as a maverick hero for sometime and continually had the native American-Indian community as symbols of the dark side of ones’ psyche and as simple savages. Coogan’s Bluff and its successors Dirty Harry (1971) et al replaces the re-imagination of America’s past with the hope and dream for a better present which also returns to that re-imagination. One thing that is interesting concerning the appropriation or adoption of the individualistic western protagonist by the detective genre is the moral ambiguity of the protagonist. Robert Warshow comments that:

‘The Westerner at his best exhibits a moral ambiguity which darkens his image and saves him from absurdity; this ambiguity arises from the fact that, whatever his justifications, he is a killer of men.’.1

Essentially Warshow is highlighting that the western protagonist is always a killer and a trespasser of rules. This trait makes him attractive because he is effective in cleaning-up the sewers of a city. However his rule breaking also makes him an non-viable option as he punches, seduces and trespasses where and when he wishes and as Detective Lt. McElroy explains to Coogan “We have a system”. Essentially the switch from gunslinger to detective becomes difficult when one understands that it highlights the difficulty of the American past and American dream; to be both a rule keeper and a rule breaker. And as a detective and a gunslinger Coogan is both diametrically opposed sides at once. Coogan just can’t exist and that is just exactly what makes his character so attractive. Don Siegel’s film becomes an arena in which he can, in Coogan’s words, try “to picture it; the way it was” before and the way it is all at once.