In the coming weeks and months I will be exploring some “film noirs”, sometimes focusing on just the film and others on how it fits within the noir catalogue. Some will be classics, others relatively unknown and even some thought not to be noirs.

Otto Preminger is often cited as an important director in film noir’s high period. This reputation was established in the “masterpiece” Laura (1944). This film is often regarded as Preminger’s best early period film and one of the greatest film noirs. Although I will explore Laura at another time this article is concerned with a lesser known – or praised – film which Preminger made using many of the same actors that starred in Laura. Where The Sidewalk Ends (1950) is often seen critically as less impressive – although it was praised at it release for its entertainment value – however, even if it isn’t as important as Laura in the film noir catalogue it isn’tdeserving of being overlooked critically. In this article I will explore the interesting formal features of the film and the striking psychological exploration of guilt, redemption, determination and being “hard-boiled” through the anti-hero protagonist Det. Sgt. Mark Dixon.

The film revolves around the cynical Dixon’s attempt to solve an out-of-towners’ death at the hands of an illegal gambling den’s owners. Dixon is warned, due to regular complaints concerning his violent temper, that if he utilizes “rough tactics” once more then he will be “back in uniform” walking a beat. However, while questioning an uncooperative witness Dixon’s character flaw re-emerges and the consequence is that Dixon kills the war-hero Paine. The subsequent narrative is Dixon’s attempt to deflect guilt away from him onto the gambling den’s owners.

An interesting formal element of Where The Sidewalk Ends is the establishment of a shady, unsavoury mood by the initial inhibition and refusal of an establishing shot which would locate and identifying the gambling den characters. A large collection of men surround a table yet the direction ensures they remain initially an incomprehensible crowd, adding to a mood of suspicion and unease.

The direction then slowly reveals that the game is rigged. Every gambler, other than the out-of-towner seems in on the scam. Although the out-of-towner attempts to leave with $19K winnings, he is found later dead, stabbed in the heart: the house always wins. Another technique in establishing a dark atmosphere is the use of interplay between dark and light. Shadow is used in one scene to produce a silhouette around every face, almost communicating a dark aura that exudes from the pours of every individual trapped in this tense atmosphere of hate and despair.

Where The Sidewalk Ends is also shot primarily at night, adding to the atmosphere and feeling of claustrophobia – because everything is enveloped, choked by darkness. The city scenes are also left without much lighting, only a few sparse streetlights and windows are lit. The darkness is claustrophobic and the desperate isolation soul destroying. Where The Sidewalk Ends drips with a dark atmosphere. Janey Place and Lowell Peterson explain that film noir’s:

moods of claustrophobia, paranoia, despair, and nihilism constitute a world view that is expressed not through the films terse, elliptical dialogue, nor through their confusing, often insoluble plots, but ultimately through their remarkable style. (1.)

This film’s shady, dark atmosphere is represented in its cinematography.

The anti-hero protagonist Dixon is a compelling character. His father was an infamous criminal, something the mobsters refer to, and this fact, Dixon’s questionable heritage, haunts him. Dixon seems to overcompensate his disappointment and shame by engaging in rough tactics, hoping at every turn to be able to punish any criminal. He also desires to be punished; if the mobsters despise him and fight him it names him as a cop, an enemy – the polar opposite of his father. This fracture in Dixon’s character leads him, in the pressure of the filthy dark world of New York City’s underbelly, to develop distinctly sadomasochistic tendencies. Every punch dealt-out is the assault and destruction of his father’s legacy. Paradoxically, every blow received is like an emotional connection to, a surrogate replacement of, the loving attention due to Dixon from his father.

In a fight with Paine – an interesting name – Dixon smiles a sadomasochistic smile after receiving a hard punch or two: the smile is seemingly a response to the pain and the anticipation in dishing out some punishment.  The consequence of his action, and his character flaw, soon pulls Dixon towards a his potential destruction. As Paine lays on the floor Dixon notices Paine doesn’t get up. Dixon kneels down, simultaneously the camera draws towards his panic-stricken face. This close-up allows us to examine and identify with Dixon’s horror and fear as he realises he had just killed Paine.

The character of Paine is also interesting as he was formerly a war hero who fell into crime and grifting, an indication of the loss of self suffered after world war II – a motif often recurring in film noirs. Down-and-out former heroes are just as often encountered where the sidewalk ends as professional criminals and hoodlums.

Understanding that he is staring into his own destruction Dixon attempts to steer the investigation, and suspicion, away from himself and onto the Scalise gang. His attempts in fact place pressure on the innocent cabdriver, and father of Paines’ wife Morgan, Jiggs Taylor.

In a scene where Dixon and his partner question Morgan the direction is interesting. Dixon turns his back away from Morgan and towards the camera. Lighting a cigarette his mood intensifies as he struggles to deal with the guilt. The direction is important as it continues to allow us to identify and examine Dixon’s guilt. A guilt intensified by placing an innocent face in the whole case and the pain is noticeable – though only to the audience.

In another scene the direction illustrates how Dixon attempts, at a distance, to inhibit, “get in the way”, of the investigation. Physically he is in the middle of it all as well: not only because he is the murderer, but also because of his attempts to steer the investigation away from himself, Jiggs and onto Scalise’s hated gang. Interestingly the central antagonist, and head of the mob, Scalise was set up in business by Dixon’s father, and is therefore the heir and adopted son of Dixon’s father. This fact aggravates Dixon and explains his desire to destroy Scalise: the rival and symbol of Dixon’s dislocation and alienation from his father.

The role of Morgan is very important symbolically in Where The Sidewalk Ends. The character of Morgan offers potential salvation and redemption to Dixon; an escape from the edge of the sidewalk and the gutter than runs by it. Morgan is an escape from the cynical world of gambling dens and isolated alienation – even though that is where he encounters her. 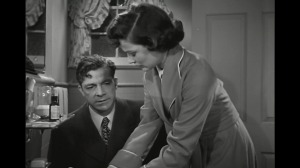 The restaurant scenes and Morgan’s company offers a safe port away from the dark storm brewing outside in the city and inside Dixon’s mind – although the city still intrudes through phone calls. Morgan also offers an introduction, an invitation, into the domestic sphere. Dazed and confused after a fight, Dixon heads for Morgan’s house – a safe port of domesticity to set his head straight. The love, care and warmth of Morgan offers Dixon something better than chasing two-bit criminals. Morgan is an offer of salvation but it is also an offer Dixon knows he cannot accept with the guilt of Paines’ murder hanging over his head like the sword of Damocles.

Just before Dixon has his final confrontation with Scalise Dixon writes out a confession – to be opened in the event of his death. In this scene he draws a blind down to block out the malevolent glow of the city. Dixon’s act protects Morgan from the place that he feels is corrupting. This paternalistic, loving heterosexual relationship offers a way out and a reawakening of Dixon’s humanity. Dixon has something more to protect other than his reputation. Something more to drive him to truth and justice other than a complex relationship with his father’s legacy and the sadomasochistic pleasure he derives punishing symbols of his father.

The conclusion of the film allows Dixon his escape into domesticity. Although it is slightly disappointing that Morgan forgives Dixon, the murderer of her husband, it establishes that it is truth which sets Dixon free to engage in a loving relationship with Morgan. The truth sets Dixon spiritually and emotionally free. In the closing scenes we can see the film form illustrating the important symbolic nature of Morgan. As Dixon stares into Morgan’s eyes the camera cuts to a close-up of her face. As she replies that she will give him “every chance” in the world she is shot with high-key lighting and soft focus. The high-key lighting sets her apart from the rest of the film, which is shot in low-key lighting. The soft focus is more interesting: it gives Morgan a bright white aura: the direct opposite of the dark aura which exuded from every individual in the beginning of the film. Where The Sidewalk Ends is an interesting film through its adept cinematography and its striking exploration of issues such as the psychological pressure of guilt, determination, redemption and being hard-boiled.

2 thoughts on “Exploring Noir: Where The Sidewalk Ends”