Architecture is important in the understanding of postmodernist thought, Jameson notes ‘of all the arts, architecture is the closest constitutively to the economic, with which, in the form of commissions and land values, it has a virtually unmediated relationship’.(1.) He continues to state that it is ‘not surprising to find the extraordinary flowering of the new postmodern architecture grounded in the patronage of multinational business, whose expansion and development is strictly contemporaneous with it’.(2.) According to Jameson postmodernist architecture has a symbiotic relationship with multinational corporations. Postmodernist architecture arose due to the loss of faith and the end of the governmental post-war funding for housing projects. Significant modernist projects are the Park Hill flats in Sheffield, and Robin Hood Gardens, a council housing complex in London, both projects were inspired by Le Corbusier’s Unité d’Habitation. These projects failed significantly in their humanitarian, rationalist aim and this is argued to be a contributing factor to the style of the postmodernist architecture. Lyotard notes ‘the disappearance of this idea of progress within rationality and freedom would explain a certain tone, style or modus… a sort of bricolage’ [bricolage means tinkering].(3.) Charles Jencks, a highly influential postmodern architectural theorist, proposed the “double coding” style of architecture, which ‘entails a return to the past as much as a movement forward… tradition with a difference’ in essence a history and a locality, treated with irony.(4.) This style, similar to Kenneth Frampton’s “Critical Regionalism”, can be found in Charles Moore’s Piazza d’Italia in New Orleans which replicates the local Italian community by referring to ‘the Trevi fountain, Roman classical arches, even the geographical shape of the country itself, transcoding their historical forms into contemporary materials [Steel rather than marble] as befits a symbolic representation of Italian-American society’.(5.) Postmodernist architecture is a “popularist” doctrine, which aims to bring the sublime into social environments, refusing to attempt to transform the inhabitants of a city to fit in ‘pre-decided rational schemes’ it aims for organic growth which transforms itself to fit the inhabitants of a city.(6.) 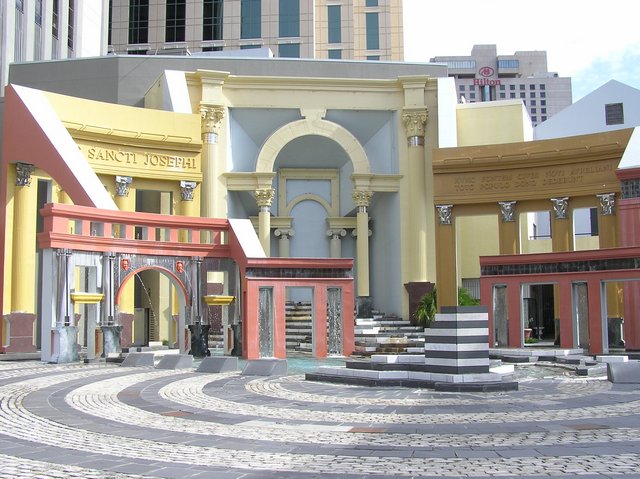 For all the rhetoric of popularism architectural postmodernism suffers from the same elitism of style it accuses Modernism of exhibiting. As Hal Foster notes postmodernism ‘far from [being] populist (as is so commonly claimed) is alternately elitist in its allusions and manipulative in its clichés’.(7.) The ironic treatment of history is evidently a treatment only understood by those with architectural training however it could be argued that the fusion of highbrow allusions and lowbrow clichés is the degeneration of the high/low cultural divide that is seen as an important positive democratic aspect of postmodernism. Hal Foster continues to explain that ‘architectural postmodernism exploits the fragmentary nature of late-capitalist urban life; we are conditioned to its delirium even as its causes are concealed from us’.(8.) What this means is that postmodernism is but a ‘gratuitous veil drawn over the face of social instrumentality’.(9.) The local identity and history referred to in Charles Moore’s Piazza d’Italia are but a cynical reference to the local culture, and traditions of that distinct area. The “Italian heritage” the Piazza refers to is a flat, arbitrary, almost racist version of what it is to be Italian. Rather than simulate and reflect the local culture postmodernist architecture reveals – unintentionally – that multinational corporations exploit the image and history of a neighbourhood without considerate understanding or care for the people. By reducing the neighbourhood into a flat image of “Italianness” the community is commodified, reduced into an image. “Italianness” is idolised; the problem with idolisation is that it reduces a Being into an image, an image that can be brought and sold: slavery. History warns us of the dangers of commodifying, idolising individuals with the suicides of “icons” Marilyn Monroe and Kurt Cobain who broke underneath the weight of their extreme commodification or as it is often named “fame”.

Postmodern architecture, theorised by Jencks and Frampton, styled itself by a returning to the past ironically and with a regionalism that refused to fit people to architectural designs, preferring to fit the designs to the people. I noted that Moore’s Piazza d’Italia was rather a cynical simulation of a cliched sense of “Italianness”. Postmodern architecture is the aesthetic of an inconsiderate corporate ethos which reduces a community and its people into flat images which are easily reproduced and replicated. Rather than reflecting the surrounding community postmodernist architecture isolates communities, reducing their image into easily reproducible cogs; the transference of communities and individuals into commodities is slavery.

1. Jameson, Postmodernism or, The Cultural Logic of Late Capitalism, p. 5.

2. Jameson, Postmodernism or, The Cultural Logic of Late Capitalism, p. 5.

One thought on “Postmodernity, Architecture, Jameson and Foster”