In the future world of Running Man we are shown a repressive society that uses the violent show of “Running Man” as a release valve to exert the pressures of living under a repressive regime. The film uses simple diametrically opposed classes of society, with their own lighting codes, to communicate clearly the conflict in the society. The dystopia is communicated by the contrasting mise-en-scene of the upper-class day scenes and the under-class night scenes. The day scenes are full of natural light and the streets are uncluttered and open. People are allowed to sit, wonder and go as they please. This is the opposite of the night scenes. 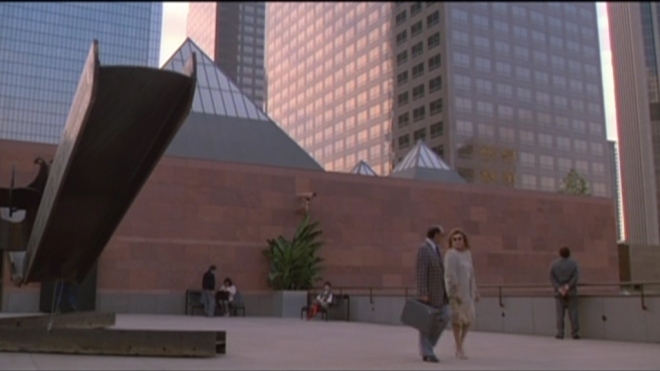 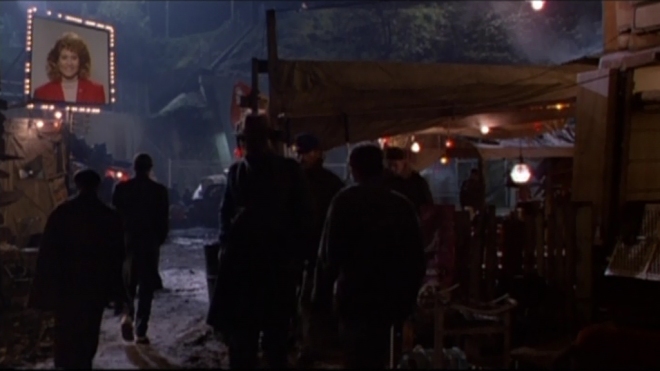 The night scenes portray the have-nots of the future world of Running Man. In the night scenes we see the under-class living in a polluted and cluttered area. The people are fenced in and contrary to the day scenes there is no casual idolatry admiration for architecture. The masses are penned in and huddled, their only source of light the brightly coloured television screens. The night scenes also consistently include the large television screens indicating the extent of the media’s influence on the masses. 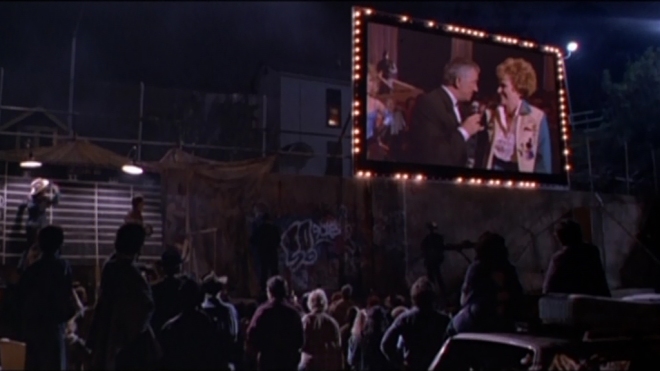 In the introduction of Running Man we are told that the government has complete control of the cultural output of the society and that all television is highly censored. If all television is censored then we must assume that violence is allowed because of some controlling value it contains. The use of violence is a cathartic one. Violence is used to burn out the passions of the people so that they have no emotional strength left to challenge the wrongs committed by the oppressive government. Running Man playfully conjures up a society dominated and controlled by violent television. The use of violence as a controlling cathartic force is ironic in Running Man as the film is of the action Sci-Fi genre. Concerns about the corrupting nature of violence in film and television are well documented and Running Man is attempting to play with this notion by creating a world where violent television has enslaved America. Violence has morally corrupted America and it is now a fascist state. The punchline of the Running Man joke is that the destruction of the media controlled state is caused by the superhero protagonist’s ability to dish out equal amounts of pain, gore and brutality against the individuals that ensure the cathartic state of the masses. The future world that Running Man creates becomes a fertile ground in which to jest at the concept of violence as corrupter and as violence as a force through which freedom is gained.