The extreme long shot is a shot wherein the object, in the western genre typically the “lonerider”, occupies a small ratio of the screen space in relation to the setting or their surroundings. In the extreme long shot the screen space is filled primarily with the surroundings: in the western genre this is a panoramic view of a desolate plain, mountain or valley. 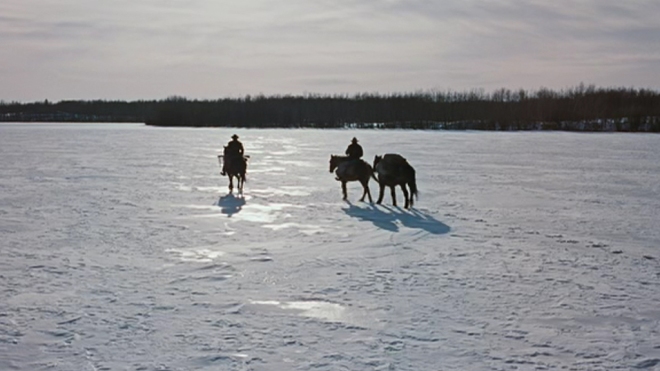 A central reason a director may choose to use an extreme long shot is that it can foreground an environment a central character is borne from or finds themselves in. This may facilitate the reading that a certain protagonist is isolated and far from civilizations’ help. It could also illustrate the barren, harsh environment an antagonist is borne from; thereby explaining his psychological state. In The Searchers (1956) the extreme long shots are used to locate Ethan, the dark protagonist, as comfortable and at one with the harsh environment of the West. An extreme long shot may also be implemented to indicate how lost, insignificant or ignored one may be in a large city such as London or New York. In The Bourne Identity (2002), and in fact all of the “Bourne” films, the extreme long shot is used to represent the idea that Bourne is “lost” or at least indistinguishable from the “law abiding” masses; agents of the CIA and other security forces are as indistinguishable and ignored as everyone else. The Bourne Identity uses the extreme long shot at an angle to produce the feeling that we are viewing the action from CCTV cameras. The feeling we are viewing Bourne’s movement from surveillance cameras adds to the sense that the CIA and governmental forces’ are potentially watching everything and everyone. The extreme long shot is an important film technique because it foregrounds an object or characters’ surroundings.