Modernist architecture is noted for its elimination of ornament and simplification of form. An outcome of Modernist architecture is that it produced large estates with many buildings built externally and internally uniform. The central vision of many Modernist estates, like the Park-Hill estate in Sheffield, were to produce easily reproducible identical living units which would satisfy and reproduce communities ravaged and displaced from their terraced estates by the second world war. Large sprawling streets were replaced with tall expansive high-rise apartment buildings. This style of architecture failed in many estates and rather than being a shining beacon of good planning the estates, like the Park-Hill estate in Sheffield, have become run down poverty stricken and crime infested. The lack of ornament and the Modernist belief in aesthetic uniformity is used in Fahrenheit 451 to symbolise the fictional societies philosophy. Uniformity is cited as the reason why books must be burnt – without uniformity society is violent, passionate and uncontrollable. The contemporary modernist setting of Fahrenheit 451 is used as a site in which the fictional societies philosophy is foregrounded. 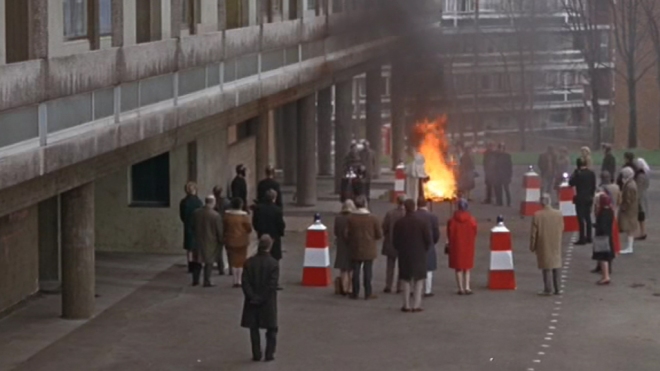 Another reason why Modernist architecture is used is to produce a sense of familiar. Fahrenheit 451is set amongst the Modernist architecture of the 1960’s – the Alton housing estate in Roehampton, South London. Fahrenheit 451 uses the Modernist estate to to produce a future world built from the contemporary fashion and architecture of the 1960’s. This ensures that the future is not really “when” but rather an extension or an extreme version of “now”. Science fiction has always used the future as a safe space in which to deal with the threats and concerns of contemporary society. However Fahrenheit 451 does not allow this act of distancing – normally provided by the setting of a different and unrecognisable future – because the vision of the “future” in Fahrenheit 451 is evidently still the contemporary world. What this does is produce a critique of contemporary society and life that is unavoidable and unmistakable.