The future world, 2019 LA, of Blade Runner is a cosmopolitan “global village”. This is communicated by the use of bi-lingual advertising signs: Coca-cola sits amongst neon Japanese symbols. Although Coca-cola is an American symbol that is saturated world wide the use of it sat against the Japanese iconography communicates the sense of lost identity. While Deckard sits eating his Japanese food two “Blade Runner” cops stand behind him, and although we are in LA they speak in a foreign language to Deckard who only understands English. He must get the noodle stand owner to translate for him. The fact that an agent of the central authority, the Police, speaks in Japanese rather than English in LA signifies the state of globalisation. The identity that is lost is the local provincial aspects of countries. Instead of an American or Japanese culture we see a cross-breed intertextual mix that produces it own new identity. As I mentioned in my previous post concerning the Postmodern nature of Blade Runner this concept of intertextuality and pastiche culture is important in communicating a distinct future world. Blade Runner asks questions about individuality and authenticity [I will write a post about Blade Runner with the aim to explore the postmodern concept of cyborg ] and the intertextual nature of Blade Runner creates a future world where people have become replicants of imagery and images that “used” to signify something individual but now have become tired. Instead of Deckard being an individual he has become a “replicant” of the film noir detective in his trench coat and hard-boiled character. Similarly Rachel has become the prototypical Femme Fatal, dressed in dark, commanding screen presence and continuously smoking. 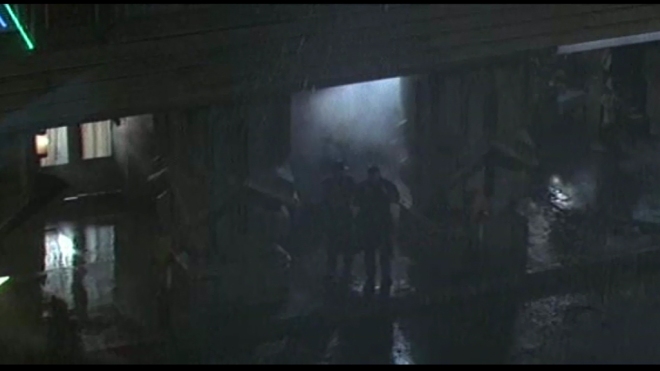 The future world social structures are communicated in Blade Runner by the opposition of setting, as in Total Recall and Running Man. The internal shots of the headquarters of the Tyrell corp. are luscious and extraordinary while the city streets are dark and rain is continuously falling. As in Total Recall the opposition of two colours can communicate an atmosphere that coincides with the location. In Total Recall the use of red and whites opposed each other and communicated a mood and sense of place. In Blade Runner the use of dark-blues communicate a sense of run-down dirty atmosphere while golds and yellows create a warm glow that surrounded the upper echelons of the Tyrell corp. 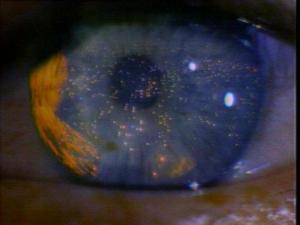 Ridley Scott’s Blade Runner is a film that explores contemporary theories of the postmodern. The film explores, through the detective figure Deckard, questions of authenticity. An aspect of postmodernity is the loss of faith in traditional meta-narratives [meta-narratives are the overarching stories that explains and legitimises knowledge or belief. Some traditional meta-narratives are Christianity, Communism and Scientific progress]. Questioning or losing faith in these narratives means that the individual inquires about their own subjectivity; and is left with no system of authentication. History, or how we have become to be, is a meta-narrative that is questioned explicitly in Blade Runner. History is a narrative which tends to explain events as linear, every event has its cause and affect; eras come one after another in dialectical progress. Even though in reality the change of era and cause of events are not easily understood the narrative of History constructs and validates a reality of existence which is understandable and rational.1 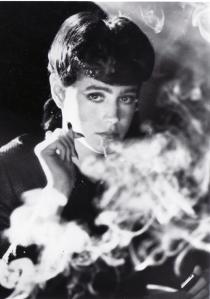 Blade Runner subverts our sense of history through the technique of mise-en-scene. In Blade Runner, Rachel, dressed as the archetypical femme fatal of film noir, goes to Deckard’s apartment with the intention of questioning him about the results of a ‘Voight-Kampff’. The scene moves smoothly into the new space of Deckard’s apartment with the traditional establishing shot, the framing of the important scene adheres to the Classic Hollywood continuity editing system. The use of the establishing shot gives the viewer time to process the alien-like mise-en-scene. The mise-en-scene combines the common domestic with the bizarre and unrecognisable, imbuing the scene with an eerie sense of the familiar, which raises questions about a disconnected sense of heritage. Although the domestic aspects are familiar with our own, the kitchen sink and cupboards, we are unable to relate the aesthetic and technological advances to our contemporary life. The mise-en-scene is important as it reveals that underneath all of the questions about Rachel’s authenticity there is a lack of rational connection with our society to the society shown. The structures that surround the characters are disconnected from any logical progression in fashion and science. 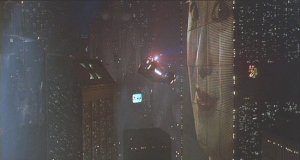 Ridley Scott raises problems concerning the conception of history as dialectical progress, cause and affect, in Blade Runner. Earlier in the film, during the opening scenes, we see that the future Los Angeles is a vision of an alien future disconnected from the present day geographic entity. Los Angeles had been transformed into a city splintering upwards with harsh vertical lines, dark shadows and bright lights; Los Angeles has been transformed into a city more reminiscent of New York.2 The philosopher Derrida once declared that nothing is outside the text; the use of continuity editing could itself be seen as an ironic example of this.3 The classical Hollywood system of narrative is itself an organizing system which explains and legitimises knowledge, and like the historical meta-narrative it orders events into cause and effect. Blade Runner critiques the use of meta-narratives to explain and rationalize while functioning from within one, therefore is a representation of postmodernity.